Dreamboat Willie— or the Joy of Living with a Mellow Fellow

Guess what my husband and I got for Christmas! We thought we were in the market for a female Welsh Terrier puppy. That’s what our dear Stella was. She was a great pet and lived to a ripe old age. But that was almost 20 years ago, and although I always wanted another one, I waited until retirement so that I would have more time to spend with the new Welsh puppy. A friend of a friend put me in touch with Keith Bailey, who, along with Sharon Abmeyer are partner breeders known as Shaireabs-Bayleigh Welsh Terriers. At first sight when I saw Will, my idea of female puppy began to fade. Will (Ch. Bayleigh-Shaireabs Time Will Tell) is a handsome, beautiful 18 month old male. I quickly realized there would be many advantages to getting a dog that is beyond the puppy stage. So from first sight in November 07, Will just charmed his way into our hearts. I often tell Keith, “I can’t believe our good fortune to have such a fine boy with us.” 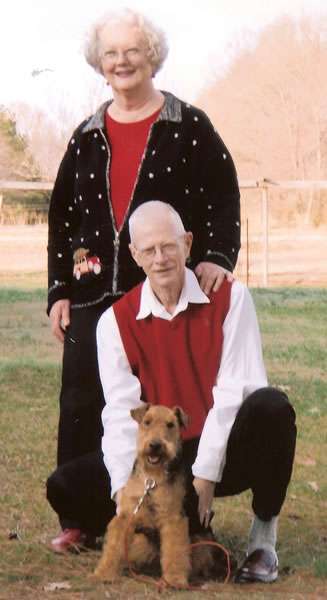 Advantages of buying a grown up dog:

It’s easier to judge the personality, temperament, and state of health at this more mature stage. I have to say that Will is surprisingly mellow, which makes him a great companion. He likes to sleep late and is not whining or pawing at his crate at the crack of dawn. Most mornings, we have to coax him out of his cozy crate. In fact he’s so mellow that we often call him “Uncle Dub.” That’s because he’s rather dignified and does not make a fool of himself over squeaky toys and does not chew things that aren’t edible. Will is great at adopting our moods, and settles down better than any terrier I’ve ever known. I don’t know if this is typical of his age (our previous WT was a silly clown for at least 10 of her 14 years! But of course she had a 10-year old boy to compete with.) Mellow, yes; lethargic, no. In fact “Uncle Dub” is quite an athlete. He can fly up and down steps with grace, and with his powerful legs, he can jump really high from a flat-foot stand and make the most incredible, accurate landings in small spaces. The most fun thing is to watch him cutting loose and running wheelies in the yard. He can change leads and directions like a quarter horse cutting a calf. But when he’s inside, he is a thoughtful gentleman and does not rudely beg for attention. Like I said, I can’t believe my good luck.

Major issue—quick and easy to house train. Already used to sleeping in a crate at night, it was easier to set up a schedule and teach the concept of house breaking. Will is very reliable and trustworthy, once we got the idea across to him that there is a difference between indoor flower pots and outdoor plants. By getting an older dog, we were spared the task of house breaking a puppy in the winter. 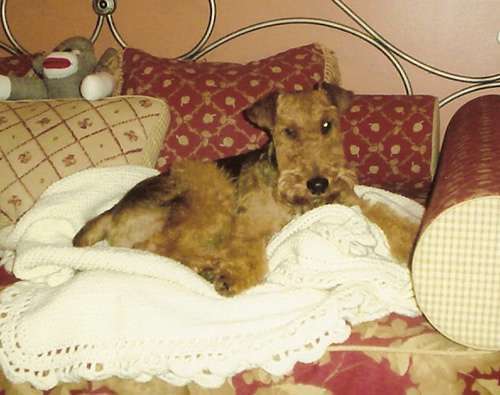 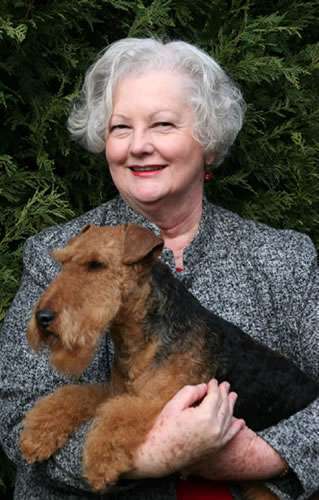 Unless I paint too idealistic a picture, Uncle Dub does have a couple of quirks.

His favorite “toy” is tearing up paper. He doesn’t eat it, just likes the sound of ripping paper. He has taught me not to leave magazines on the floor. Will had a great first Christmas with us—like a kid who would rather play with the box and the paper rather than the gift inside. On Christmas morning, we let him rip and shred wrapping paper to his heart’s content.

His other fault, although I find this endearing and probably a sign of intelligence, is that he’s nosey. I’m sure most terrier owners can identify with this trait. Will hates to be on the other side of a closed door. He’ll wake up from a nap to follow me around the house as I do the most mundane things—like folding laundry, watering plants, dusting. For some reason, he dutifully wants to be in on everything, even keeping me company while I’m on the computer in the office bedroom.

Will and I are taking beginner obedience class together. He’s not the worst one there! When we’re practicing our sits and stays at home, he’s great. In class, it’s another story. He’s very nosey about what everyone else is doing. When I’m standing in front of him, he keeps leaning from side to side as if to say, “I can’t see a thing, one of us will have to move!” But he’s getting better, and from time to time, I’ve actually caught him paying attention to me in class!

My first and favorite nickname for Will is “Dreamboat Willie.” He comes from such a line of fine champions, I catch myself just looking into that handsome face, or digging my fingers into his beautiful coat, and I keep saying, “I can’t believe our good luck.” How could we have waited so long to get our second Welsh Terrier? It must be providence—Dreamboat Willie is proving to be worth the wait!