In August 2010 we became a two Welsh Terrier Family. Gibson, who is almost four, is generally laid back and prefers to spend his day on the back of the sofa looking out the front window waiting for the mailman to show up. Like most Terriers, both of our “kids” feel that a visitor who doesn’t come inside and say hello deserves to be told off in no uncertain terms. We can usually tell how mad they get by the status of the vertical blinds when we get home.

Thinking a nice female companion might be a perfect way for Gibson to spend his life, we brought home little Abigail Scarlett. She is now one. Introduction went surprisingly well and within an hour or so Abigail had the lay of the land, discovered the dog door and checked out the yard. After a small discussion between the two of them, we are sure they came to the joint conclusion of “Let the Fun Begin”.

First game for Gibson was to chase Abigail and bowl her over. Abigail’s response was to let out a yip which brought Dad or Mom and bowling over stopped. Lesson learned, a good yip always gets Gibson in trouble, so fake it as often as possible and see what happens. Gibson is still and always will be the boss within our dog hierarchy. Once all the games, lessons and territorial stuff was out of the way, we ended up with two dogs who love to spend most of the day on opposite ends of the sofa top waiting for the mailman and our return. They also love to run thru the house like a tornado taking turns chasing each other and grabbing tails, play growling etc. But there are times Abby gives Gibby big long face cleaning licks!!! We think they do love each other!! Abigail is the high jumper. He certainly can’t do it. She also can open lots of things like closed unlatched dog crates etc. He does not. Let’s face it, girls are smarter, at least in our house. She can jump up on our bed from a standstill. It is 35” from the floor, and Gibby just stands and whines.

Around May 2011, our two Terriers experienced their first encounter with something other than a cat, squirrel or Dove; which, other than to do their business, is their only justification for leaving the air conditioning. Usually they go out as a pair around 9:45 PM to make a last inspection, take care of business and back for bed. On this particular night, I stepped outside just as the two made it to the end of the pool fence to turn into the yard. I heard a rustling sound and pretty soon around the corner came Gibson closely followed by Abigail, in turn being followed by a low level flying Mallard Duck in hot pursuit!! I stood there stunned as both dogs raced wildly into the dog door and the Duck pulled up short of smashing the wall and stood there, waiting. Neither dog would make an appearance. I, with some help from Genelle, managed to chase the duck into the pool area where he settled for the evening. Once safely behind the pool fence the “kids” came out to put on a show of bravery. If the duck swam they would jump and bark as if they were on the hunt. In the morning we were able to catch the duck and take it to a nearby park that had lots of wild geese and ducks. Now every night when they go out, they look through the pool fence to see if there is a Mallard swimming in their pool. 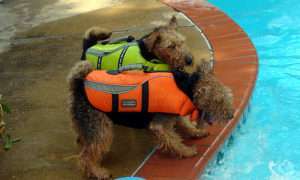 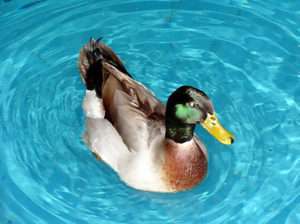 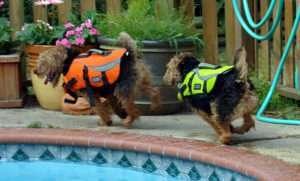 Abigail and the Biscuits

Gibson has never shown any interest in anything other than his toys, treats or his spot on the sofa. Abigail, however, is very mischievous and has shown interest in everything, but most especially the dining room table. Having left the chair out a few times, we have paid the price. Our dogs don’t get people food but Abigail spends a lot of time searching for wayward crumbs under the table. For breakfast a couple of weeks ago, my wife made a pan of homemade biscuits. She decided to go outside to check on something after I went to the office and accidentally left the chair away from the table. When she came in, she claims it was less than a few minutes, Abigail was standing over the pan, and the two remaining biscuits were nowhere to be seen, nor was there any evidence there had ever been any biscuits eaten, no crumbs, not anything. Apart from her being on the table, no one could have found a shred of evidence to incriminate her, as she had scrubbed the crime scene clean. Needless to say she got a smaller breakfast that morning.

Our two little Welshes are such a joy and with such different personalities we now know why people want more than one. People ask us why we want two dogs that are the same. They don’t know Gibson Mortimer and Abigail Scarlett O’Hairy.    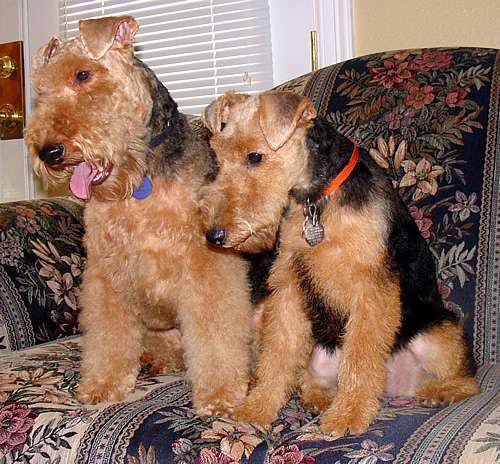 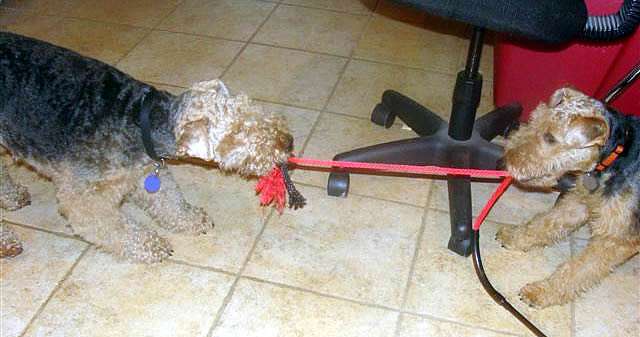