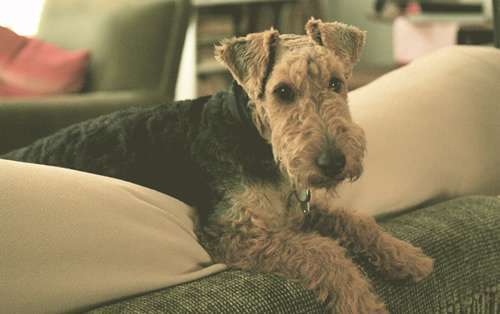 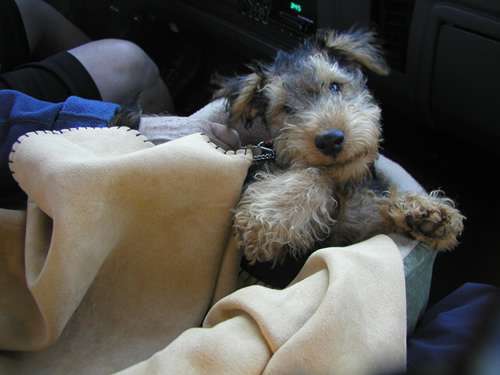 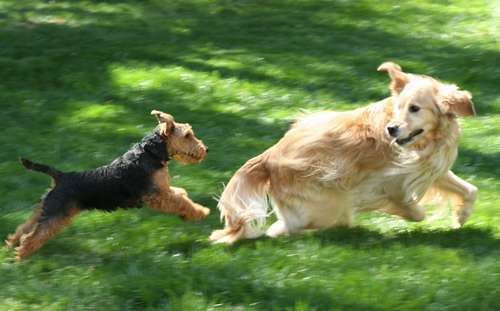 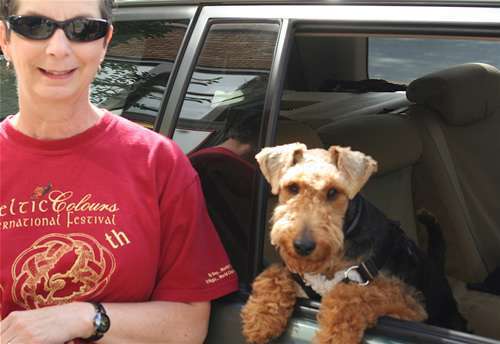 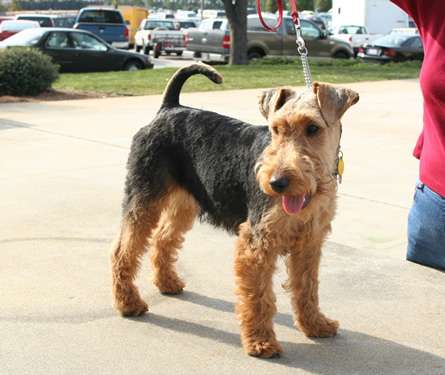 Gus was perfect. He was handsome, smart, loyal, athletic, loving, and fun loving. When Gus died, a piece of us died with him. He was six days away from his first birthday. He came to us in October, all 10 weeks of him, furry and full of trouble. After the initial housebreaking traumas, he had full run of the house when we were home. He had his favorite places to sit, watch, lie, and sleep. In the TV room, he loved to climb up on top of all the sofa pillows and sleep. We called him “the Prince.” At the front door, he would lie in his bed and watch through the storm door as the world walked by. In front of the second- story window, he would sit on the ottoman and watch the other dogs and people in the neighborhood. In the office, he had his chair. He preferred a pillow in the chair, of course, but would always be there with us while we worked.

When he became older, he slept in the bed with us, staying in his place at the foot of the bed until 6:20 every morning, when he would stand and say it’s time to go out. Gus loved to take an off-lead walk in the woods beside the stream, toward the lake. He would run 30-40-50 feet ahead of us on the trail, bounding up and down like a rabbit, then waiting for us to catch up. Then he would lag behind, let us get ahead, and then race past us on the trail with such unbounded joy, it made my heart leap. In the stream, he would chase rocks that we would throw into the water, pretending like he was going to fetch them, knowing all along that the rocks go to the bottom, and it was just a game. He would leap down the steep creek bank, maybe 10 feet to the water, run along the creek, and then climb back up the steep bank like it had steps. Gus got along well with all the neighborhood dogs, and the pack of dogs where he occasionally went for day care. He loved to play and wrestle with other dogs, big and small, and was not afraid to play with the big boys. And he could jump – oh, could he jump – in the air to catch the ball, up on the back of the sofa to watch, onto the bed to sleep. “Gus, UP!” and he would jump in the back seat of the car and stand while we put his seat belt on. To go for a ride in the car was a big pleasure for him, and he was a great traveler. Gus traveled from North Carolina by car back through Tennessee to Arkansas, Missouri, Oklahoma, Kentucky, Virginia, West Virginia, Pennsylvania, Massachusetts, Vermont, and Maine. When we would drive slowly through the town centers, we would lower the back window, and he would stick his head out to see more. The wind would blow in his face, making his ears stand up, and all along the sidewalks, we would see folks point and smile. Gus gave pleasure to everyone who saw him. He was extremely interested in everything around him, and very perceptive of anything that appeared out of the ordinary. “Let’s go check it out, Gus,” and he would pull ahead to patrol the area. He adapted to any situation, always finding the best part about it and finding a way to make each experience fun.

Even as the poison took him (Gus ate a small terra cotta figurine..a little pig..that we had dropped on the floor. The glaze on the figurine was toxic, and he had chewed on the little legs which left sharpened ends that ripped his digestive track as it was swallowed. The tears in his system allowed the blood to carry the poison throughout his body, and all his systems began to shut down) so quickly, the last time we saw him walk was when he walked slowly but willingly on the lead with the vet tech to the examining room, where they found he was dying. He never complained, even in the end.

We moved to Maine under a shadow, of course, because Gus died just before we moved. In an effort to make the right decision about getting another dog, we got three big books about dog breeds, trying to convince ourselves that getting a breed other than Welshie was ok. We talked to several breeders of different breeds and we always held our relationship with you up as the standard we aimed for in finding a breed and breeder. It was important that we felt comfortable with the person, that we felt the breeder worked according to the highest standards, and with whom we could have an ongoing relationship. Because we couldn’t decide onany one breed, we delayed four months from the time Gus died. We couldn’t bring ourselves to get another Welshie (it would just be too much pain to see one that looks so much like Gus).

We went to a dog show in Fitchburg, MA to look around at various breeds. Before we left the house to drive to the dog show, I sat down in front of the ceramic pots that hold the ashes of Gus and our corgi, Abby. I asked them to please help me find the right dog, and lo and behold!!! THEY DID!

As we walked around all the tables, we just happened to pass a table near the elevator with a wonderful little dog and a very friendly and helpful breeder/owner. The dog was an Australian terrier. The Aussie looks like a cross between the Welshie and Corgi. I knew at that moment, we had found the right breed. So waiting brought us to Jack. Our new little fellow is named Notice Jack-O-Lantern, since he was born on Halloween.
Thank you, Keith, for all your words of support and sympathy and for your efforts to help us fine another breed. I hope I am on the healing road after the tragic loss of Gus. I still think of him every day.  

W    e now have been in Maine since mid-October 2007, and we are very happy with our move. We love the cooler weather and the proximity to rocky shores and sandy beaches. Although we don’t live directly on the coast, we are just two blocks away, and we regularly hear the fog horns from the nearby lighthouses, as well as the blasts in the fog of the giant tanker ships as they move out of or into Casco Bay, where Portland lies.

In mid-January, you will recall, we got a new puppy, an Australian Terrier named Jack. He has grown into a handsome and well-behaved dog, an affectionate companion and traveling buddy. He slipped right into Gus’ seatbelt and hangs his head out just as Gus did whenever we slow down. He is quite good-looking. As a matter of fact, he has been invited twice now to model for fetchdog.com, a Maine-based online business founded by actress Glenn Close and her wealthy husband. I will forward you the photos from the shoots in separate emails. I think you will be amused.

But in the meantime, I am attaching a photo of Jack taken when we were at Pemaquid Point Lighthouse, which is the scene depicted on the Maine state quarter. He loves to climb on the rocks at the shore, and he is getting braver about following the neighbors’ retrievers into the water at the sand beach. He goes to school once a week to spend the day under constant supervision with a pack of dogs about his size. This socialization has really seasoned him well to being out in the world.

Keith, he really is like a blend of our corgi and of Gus. Faithful and obedient and not-quite-so-short as a corgi, but long like a corgi, and fun-loving, handsome, and athletic like Gus, although he cannot jump like Gus could. He doesn’t shed much, just in the spring and fall if I brush and strip him from time to time.
I’ve been meaning to send you some photos of him a little older than the ones you currently have on your website, so that you can insert one of an almost-grown Australian Terrier with a more accurate depiction of the breed.

I still miss Gus, and Allan and I talk about him regularly. But Jack has helped heal the pain of Gus’ death, and we are happy and whole again with a little dog. 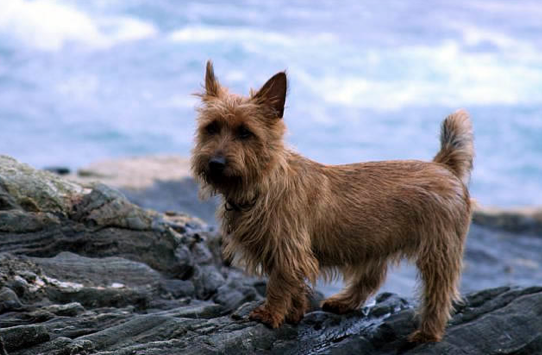 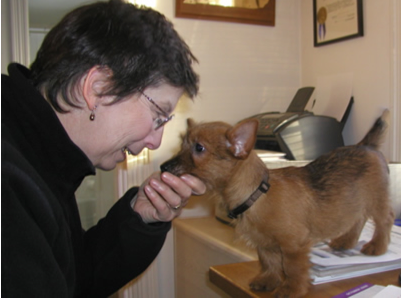 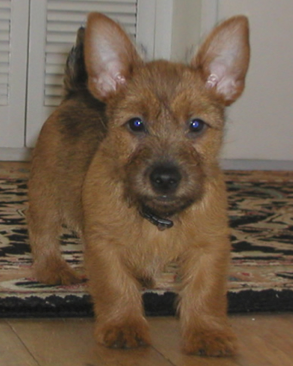