There Will Always be a Welsh Terrier in My Life 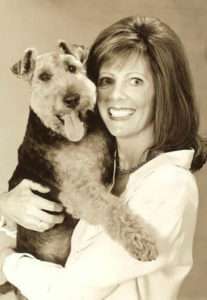 It all began for us in Minnesota, the year 1991, when we got our first welsh terrier. We were first-time dog owners and had no concept of how this adorable 6 pound bundle of energy was going to forever change our lives. We named him Mactavish, Mackie for short, and he was nothing short of spectacular. He was a dynamo in every sense of the word. He gave 110% in everything he did whether it was attacking the lawn sprinklers, jumping at the garden hose in order to bite the spray of water shooting out, fighting the bubbles from the jets in the outdoor Jacuzzi, running back and forth to chase the light from a flashlight until a path was worn in the carpet or barking at orange cones and blown out tires on the freeway until the car windows were scratched and completely steamed from his barking. None of that was ever a problem for us. We could easily replace the carpet or a window, but we could never replace our Mackie. He lived a life that people longed for and no dog was more deserving.

Fast forward to 2005. We are now living in southern California and our Mackie is 14. He has had some health problems and reality is hitting us hard that he won’t be with us forever. Mackie’s breeder Pam was no longer breeding welsh terriers but recommended another wonderful two-some, Sharon Abmeyer and Keith Bailey. I didn’t want to be making these phone calls for a new puppy … I only wanted my Mackie, but in my heart I knew that his remaining time with us was limited. Sharon and I spoke first and I knew immediately that she was the right breeder for us. Our original intention was to get a new puppy while Mackie was still with us. Selfishly, we would have been doing it for us, not him. We simply couldn’t imagine our home without the presence of a dog. But after much thought, we decided that Mackie came to us as the one and only and he deserved to go out that way. Six months prior to his passing, he was hospitalized twice. Once for pancreatitis and then for kidney failure. On both occasions, our vet told us to prepare ourselves because, short of a miraculous turnaround which he did not anticipate, chances were that he wasn’t going to make it out of the hospital. I remember locking eyes with him and saying “you don’t know my Mackie”. He made it out of the hospital both times. In our hearts, we believe he gave us those final six months so we could prepare ourselves for the inevitable. That horrific day came in November of 2005, a day no dog owner will ever forget.

On the way home from the vet’s office that morning, we called Sharon to tell her that we just said good-bye to our beloved Mackie. Not even having gone home yet, we knew wholeheartedly that we couldn’t bear the emptiness of that big house and needed a new puppy right away. Being the miracle workers that Sharon and Keith are, they said they had the perfect new little boy for us. We flew to Atlanta and picked him up the day after Christmas. The new love affair began all over again. We named him Mackie, now referred to as “Little Mackie”, after his big brother. We could think of no better way to honor our first Mackie (now referred to as “Big Mackie”) than to have his little brother carry on the Mackie name. 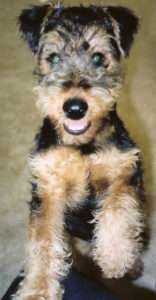 Little Mackie is the most social, sweet, loving, affectionate, laid-back dog you’ll ever lay your eyes upon. Everyone, and I mean everyone, is a friend to him. Friends and strangers alike light up when they see Mackie coming their way. And, of course, he always does so with a big smile, frantic tail wagging and an endless supply of kisses. We call Mackie our town politician because he feels the need to socialize and say hello to every single person he sees. What I think will be a quick trip to town most often turns into a two-hour event. That’s fine by me. His gift of goodwill and positive energy should be shared with the masses. If I’ve heard it once, I’ve heard it 1,000 times that “he is the calmest terrier I’ve ever seen”. My response is always “he’s southern”. And for that I have Sharon and Keith to thank and of course Fancy and Opie, his biological parents. Cesar Millan, the Dog Whisperer, can only wish for a dog this happy and balanced! Little Mackie is a Mama’s Boy and proud of it! He will choose to sit in my lap vs. anywhere else whether we are in our family room, vet’s office or the car and sleeps curled up in a ball right up against me or lies across my legs or chest at night. He always has to be touching you and I love that. My husband Michael and I always say that Big Mackie handpicked him for us. He knew how much we were suffering after his loss and having this now 22 pound bundle of sheer love and affection was exactly what we needed. We didn’t know it at the time, but our Big Mackie was still performing his magic from his rightful place in Doggie Heaven. We never question if heaven and angels exist because they could be the only ones responsible for creating our Mackies.

Owning a welsh terrier is a privilege, it is an honor. Not a day goes by that I don’t think to myself that I am so fortunate to have had the opportunity to know and love this breed. What a welsh brings to your life cannot be measured through numbers or currency or any of the traditional ways you would measure something. It is measured through the love, laughter and memories of countless stories that we tell of past antics that bring us laughter and often tears. I feel fairly confident in saying that once you meet a welsh terrier, you will never forget it. Their confidence, attitude, spunk and playfulness truly cause heads to turn as they prance down the street (a street that you’d think they owned if you didn’t know better). They are rugged, sturdy and feisty and also the most attentive and loyal companions you could ask for.

Two Mackies. Big and Little. Our two very special boys. Few things in life are certain, but I can say with 100% certainty that we will always have a welsh terrier in our lives and that welsh terrier will always be named Mackie.