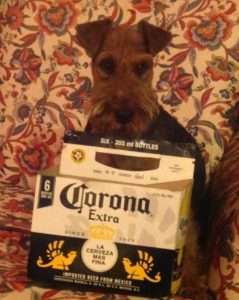 Voldemort was born on July 11, 2016 to sire GrCo. ChCo. JCo. VAyC. 2016. D`Lukas M&M Trailboss and dam ChCo. ChAm. Int. Shaireab’s Bayleigh Pola Emburho de Brujas. He was in a litter of four males—“Lucius Malfoy,” “Barty Crouch,” and “Peter Pettigrew”—all warlock names of evil characters in the Harry Potter saga. His birth was dramatic and due to the great professionalism and passion of Manuel Sanchez, MVD, Berkana Clinic, who brought him back to life after being born without a heart rate.

Pola’s pregnancy was without complications. During her regular vet checks, we saw that there would be four puppies. As the estimated whelping date drew near, we prepared for delivery and checked her temperature regularly. The time approached and Pola became restless with some contractions. After a couple of hours, the contractions stopped. Still, she was restless. We suspected something was not right and made the decision to take her to the vet.

We met in the clinic with our dear friend and veterinarian, Dr. Manuel Sanchez, who proceeded to check on Pola and her babies. After a while, he came to talk to us and the news was not encouraging. Something indeed was not right and it was essential to perform an emergency Cesarian section in order to not jeopardize the health and safety of Pola and her babies. He had checked the puppies’ heart rates: two were normal, one was extremely low (close to zero), and the fourth did not have a heart rate.

Dr. Sanchez told us that he would do his best to save Pola and all of her babies, but he could not guarantee anything. We told him that we understood and the most important thing for us was Pola!

We sat and waited in the clinic as Dr. Sanchez began surgery. After a while, we noticed several of the veterinarians and assistants running up and down the hall carrying different things—warmers, blankets, oxygen and so much more that I no longer remember. We never asked anything and neither did anyone tell us anything. Everyone was focused on their work. After more than three hours of waiting, always hoping but imagining the worst, Dr. Manuel came to us with a big smile on his face to tell us that Pola and all of the babies were safe!!

Dr. Sanchez explained the complexity of the surgery and the removal of the puppies. Each of the babies was wrapped in a kind of macabre web, which had them completely adhered to the walls of the uterus. It would never have been possible for them to be born naturally. He firstly had to detach each puppy from the uterus with extreme care, and then, in a race against time, to remove each baby from that thick membrane in which each was encased.

Finally, and perhaps the most difficult task, was to attend to the two babies who seemed to have no chance to survive. The end we already know, and it’s a happy ending. Dr. Manuel Sanchez brought back to life the two smallest puppies!!!

The work performed by Dr. Sanchez was only the beginning. Taking this litter forward was now our responsibility. The two survivors—“red ribbon” and “green ribbon”—required our utmost attention. “Green ribbon” was no problem. He ate well and began to gain weight very quickly. “Red ribbon,” however, did not gain weight, and at times, did not look good. Finally, after persistently spending nearly two days and nights without sleep attending to “red ribbon, he began to respond. We saw in him the heart and desire of a fighter who wants to give the maximum to go out to win. In just a few days, he not only reached the weight of his brothers, but surpassed them all!

Since then, it was love at first sight. What remained now was the wait to see how “Red Ribbon” was going to develop and perform. Yes, you can guess the happy ending of this story. “Red ribbon,” the smallest in the litter, turned out to be our star: Voldemort!!!!

During the end of 2016 in his first shows in Colombia at the age of only five months, Voldemort appeared strong in the ring and seemingly yelled to all, “Look at me, I am king of the world!” He won the Group and later went Reserve Best Puppy in Show, but the highest praise awaited him. Having won one or two BIS of course would have been much appreciated, but really just the satisfaction of living and sharing the awakening of our new star left us completely happy.

The wait was not long. In March of 2017, in the most important circuit of shows in Colombia, Voldemort went twice Best Puppy in Show, once Reserve Best Puppy in Show, and also took Best Bred by Exhibitor. By the end of this circuit, he turned up to be Puppy No.1 all breeds. Unfortunately, this was also Voldemort’s last show as a puppy (in the FCI system, 9 months and up they go in the Junior class), and with nearly a year still to to go by, it would be very difficult to hold on to that position.

When Voldemort was presented as a Junior, he finished Junior Colombian Champion and BOB over his father, who was then, and remains today, the No.1 Terrier in Colombia. Voldemort took first in the Terrier Group and 3rd and 4th place in Show. He did similarly well in the following show circuit.

(from the Junior Class)

A New Journey For Voldemort 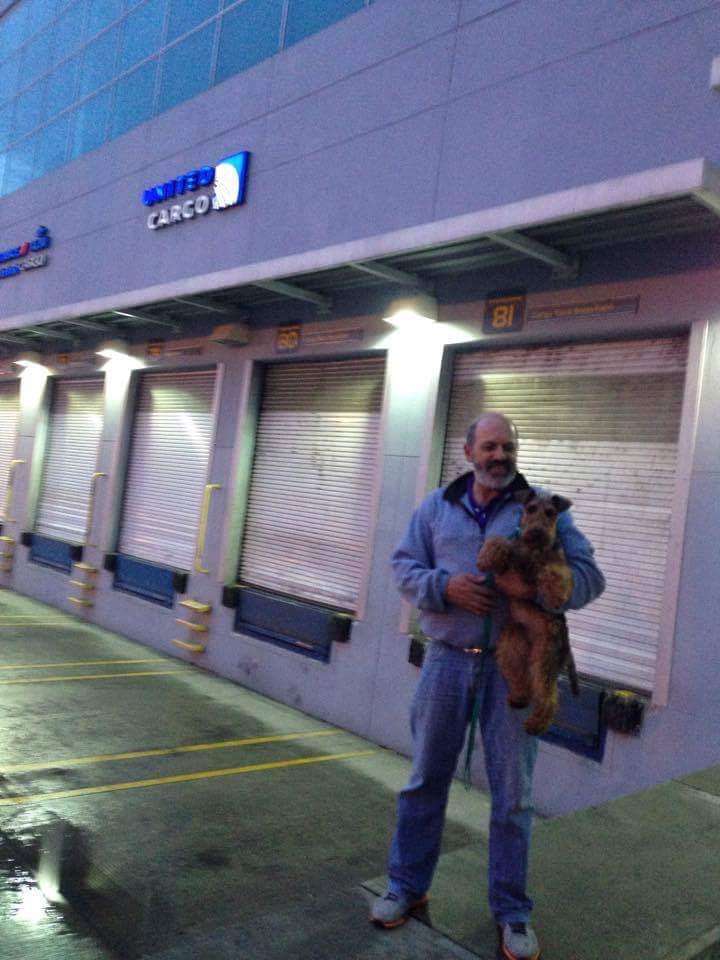 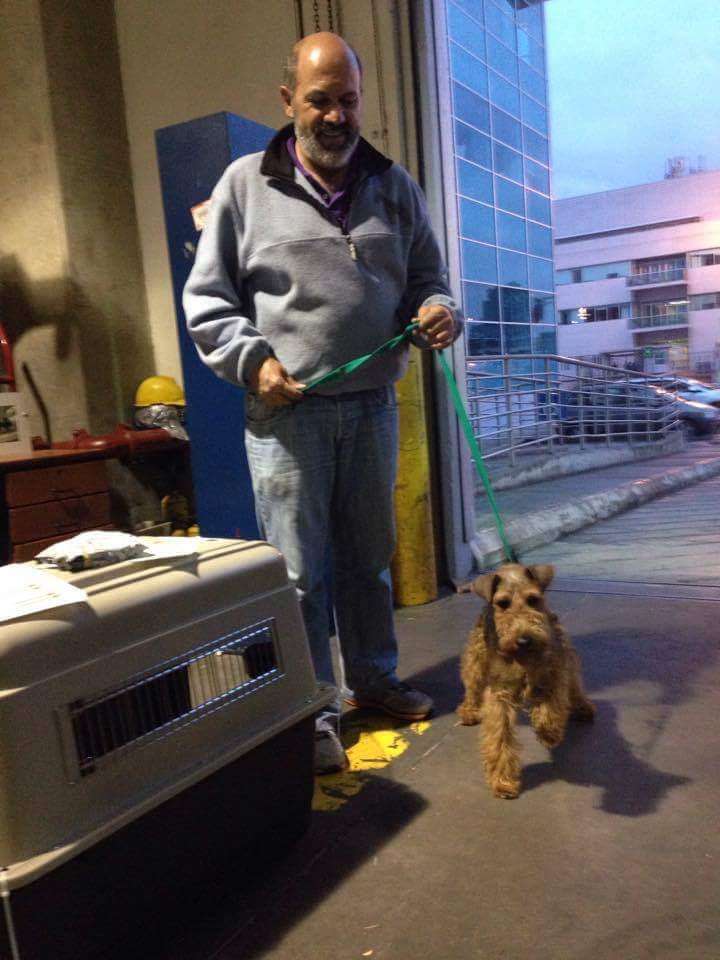 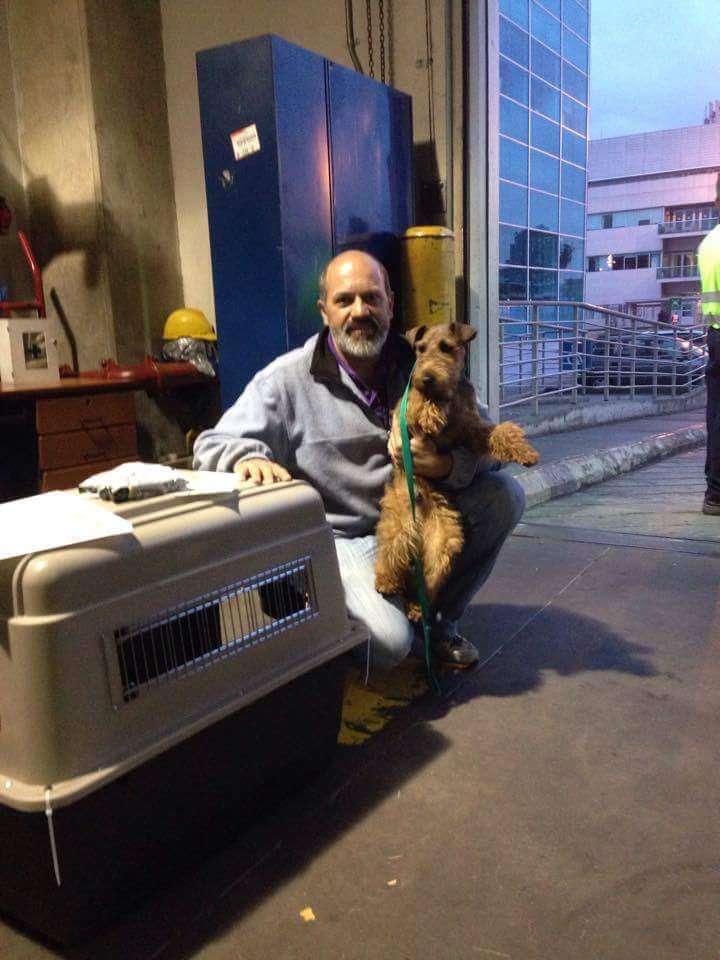 At the end of May as I was judging in South Africa, I received a call from my friend, co-breeder, co-owner, Ms. Keith Bailey inquiring about my immediate plans for Voldemort. She told me about her interest in having her handler Ms. Tracy Szaras present him in the United States. I was indeed interested! Three weeks later, Voldemort flew to Knoxville, Tennessee.

Voldemort would not be with us today if it were not for many people who have helped me on the path I have traveled. I must thank all those who have allowed me to get to where I am today.

I would not have this wonderful breed if it is not for Ms. Ruth Prehn, who in 1994 entrusted me with a son of the last litter of the great Benjamin “Ledgerock’s Benjamin,” and later a female (Ledgerock’s Emma) so that I could start breeding Welsh Terriers; to Mr. Bruce Schwartz for allowing me to breed my first bitch with the great Billy “Anazasi Billy The Kid”; to Ms. Elizabeth Leaman and Mr. Richard Powell for entrusting me a bitch from their breeding Esther “Hapitails Esther at Embrujo”; to Ms. Tracy Szaras, Mr. Wood Wornall and Mr. Santiago Pinto for all their teaching; to the veterinarians who have helped us, including Dr. Manuel Sanchez and Dr. Guillermo Forero and their teams; to Ms. Maria Eugenia Montañez, a breeder with whom we have made great the breed in Colombia; to our unconditional friends; to my family especially my children, Juan Manuel and Miguel, who have often made great sacrifices for my crazy passion; and almost last but not least important, to Ms. Sharon Abmeyer and Ms. Keith Bailey for becoming my partners, co-breeders, co-owners, and more than anything, my friends. I have learned from them that in such a small world as this of purebred dogs, breeders should be there to support each other. Since 2007, we wouldn’t have wanted to do anything different than share some of our dogs (Merlin, Nick, Esther, Baron, Player, Pola, Voldemort). And last, but for me the most important person, my Love, Florencia Ybarnegaray, whom with her permanent support, company, her strong character and her unconditional love, I have shared not only the best moments in this path, but in the most difficult times, she has given me the strength not to give up when I have been about to leave everything aside.

This is just the beginning of Voldemort’s story because the story is written every day. 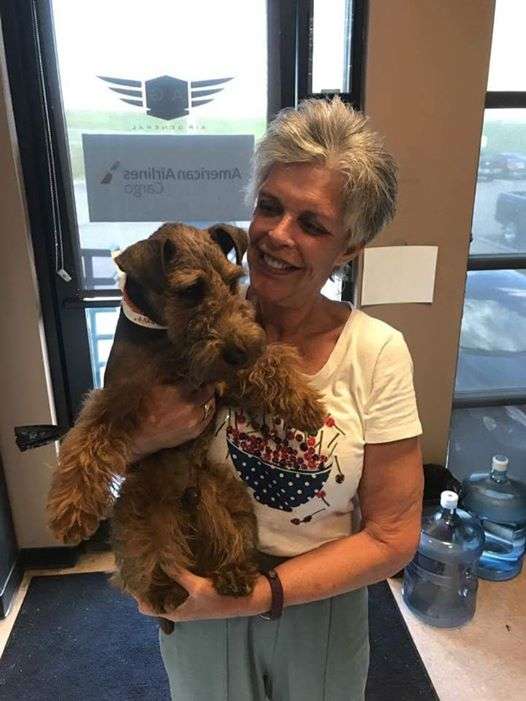 Keith picking Voldemort at the airport

Voldemort days after arriving in Knoxville. He loves his toys! 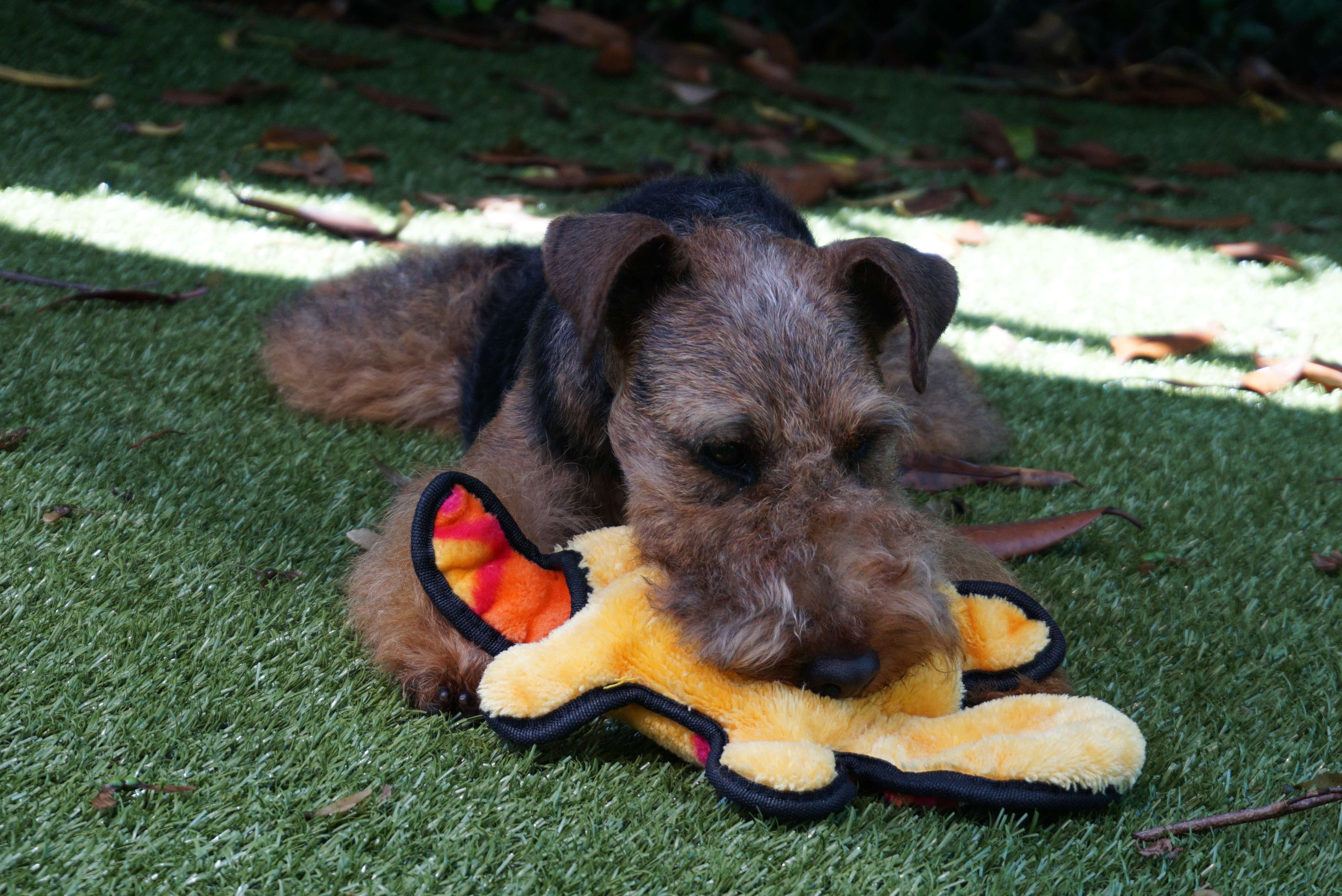 Voldemort tired after playing. He loves his toys, and they double as cushions!
Visit Voldemort AKA Wally's Sire Profile
error: Content is protected !!